Merry Christmas to all!!!! Merry Christmas Everyone!
i got late in making this post T.T
but what can i do?
its so damn cold and makes anyone lazy xD 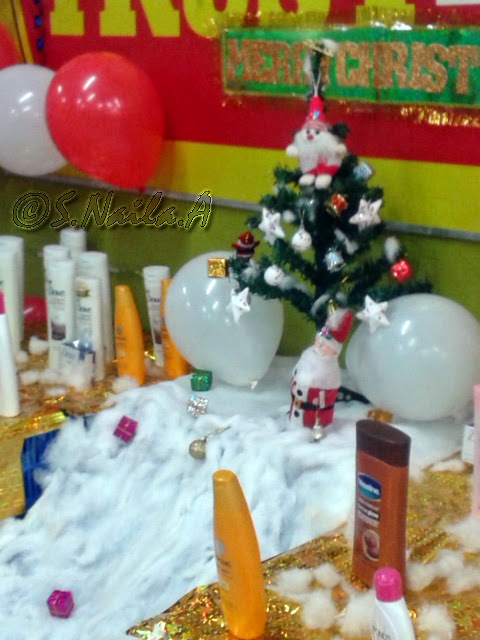 For the first time in her life she met a Santa, and that santa even gave her free toffees so it was like a heavenly day for her :P

This Tiny Santa on display was soo sooo cute 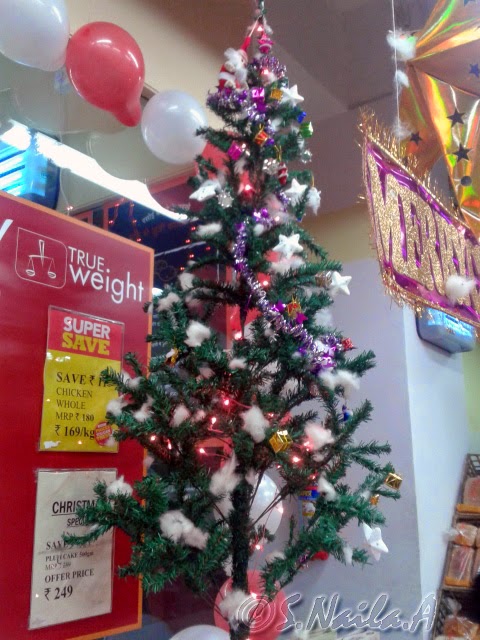 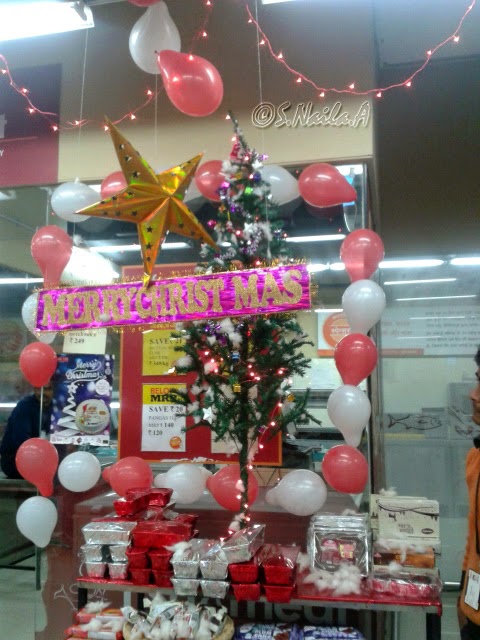 And this Christmas Tree was the best and the most Beautifully Decorated one
They were selling really yummy special plum Christmas cakes over there
even  tho it was a bit pricy but it was worth a try :D 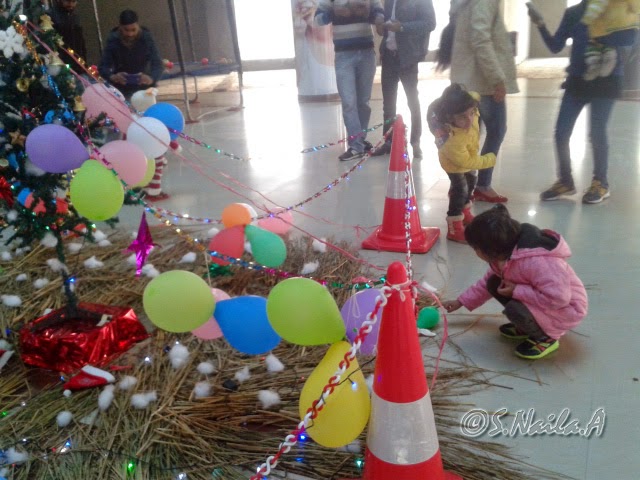 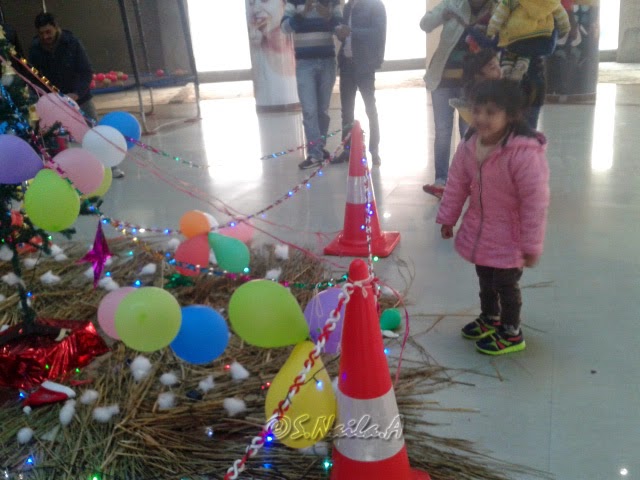 
And this girl just wouldnt stand still for a decent photo
getting all excited yet again :) 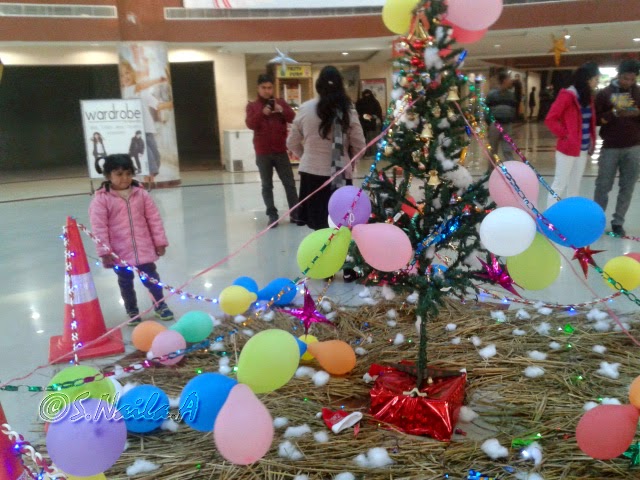 here is a somewhat decent picture where she is thankfully not moving and concentrating too hard on which balloon to take from here :P 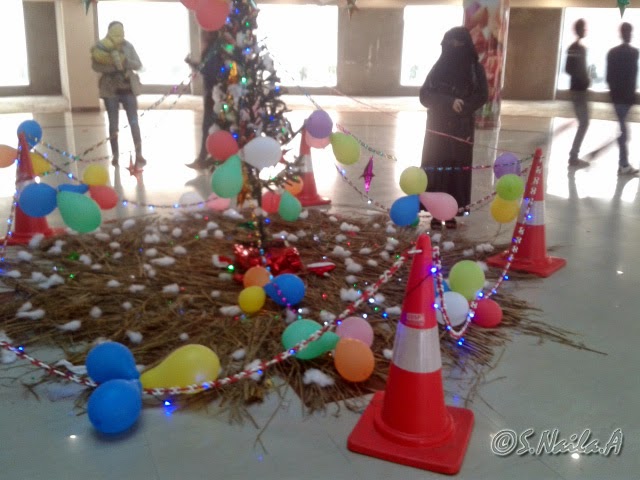 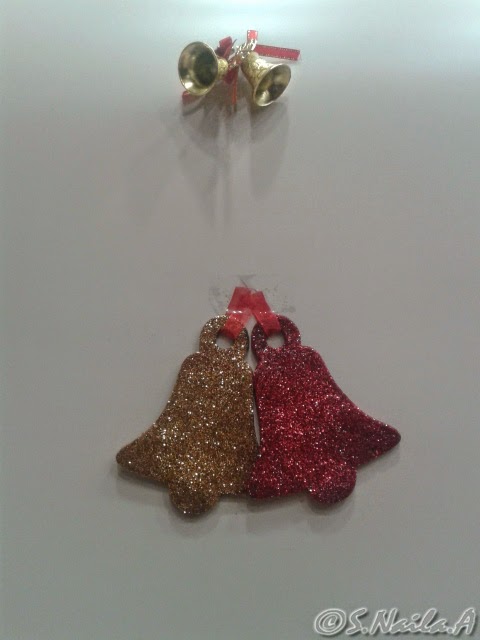 And as the day had been going so great and beautiful for my Niece
my dad had decided a surprise for my mother. 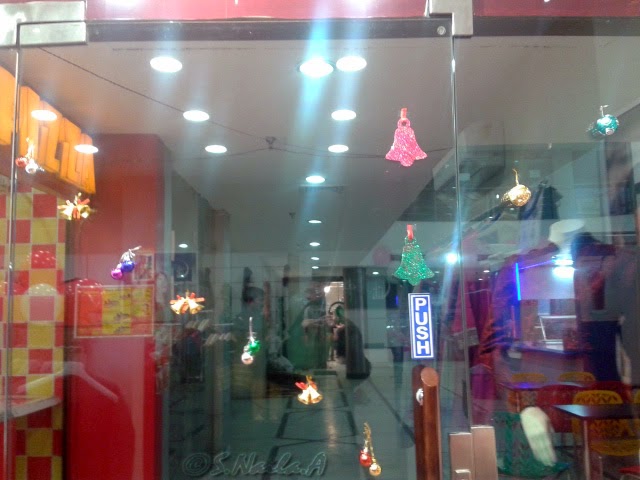 She was tooo happy
and one of the coat she chose was something i had my eyes on
too bad for T.T
but well while they were too busy buying coats here 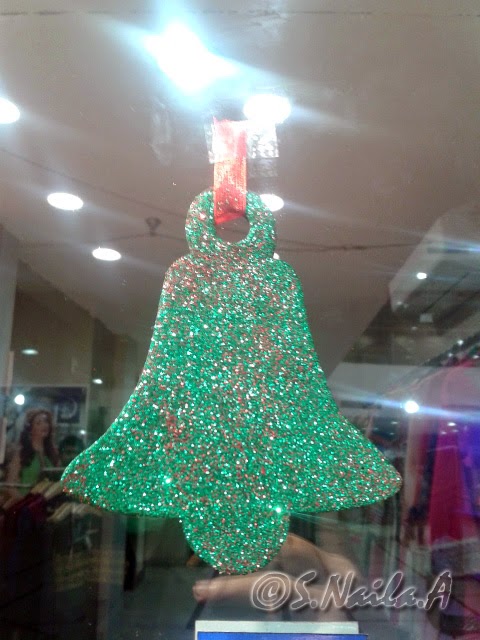 i was busy reminiscing the time i came to this building the first time.
It was one memorable day of somebody's birthday :)
so in all that i lost my chance to buy anything >.< 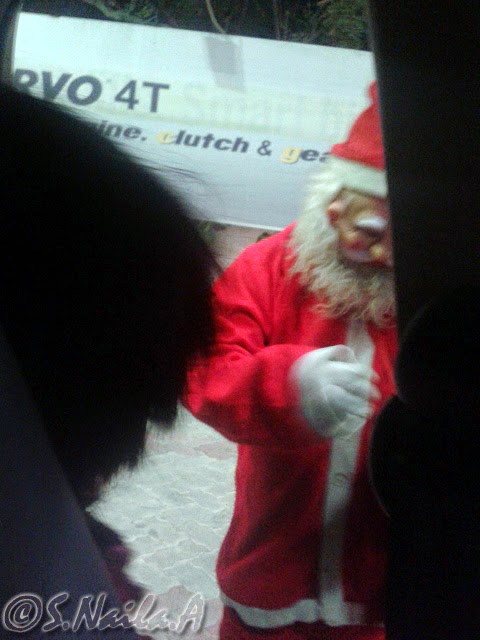 Later on when we came to petrol pump for some gas, we saw this another Santa
the previous Santa at the mall was a female and this one was a male
and he gave toffees not only to baby but to everyone in car Also xD
here he is taking out toffees :D 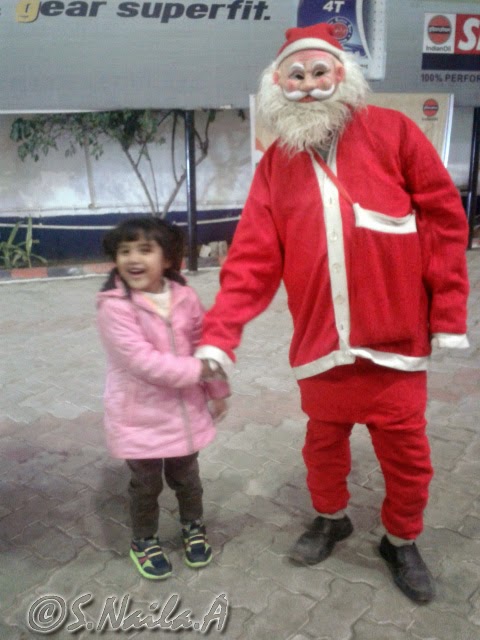 And here all grinning and shaking hands with him xD 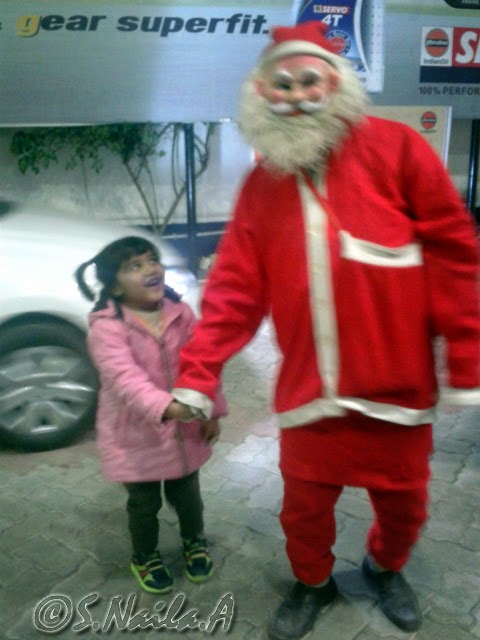 Yet again the smile just wouldn't go off her face 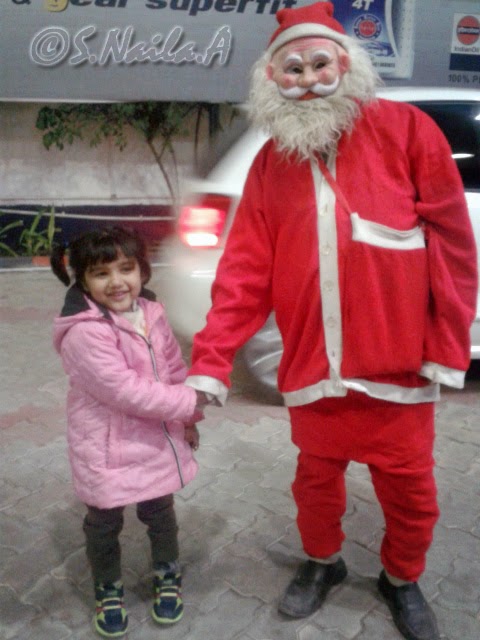 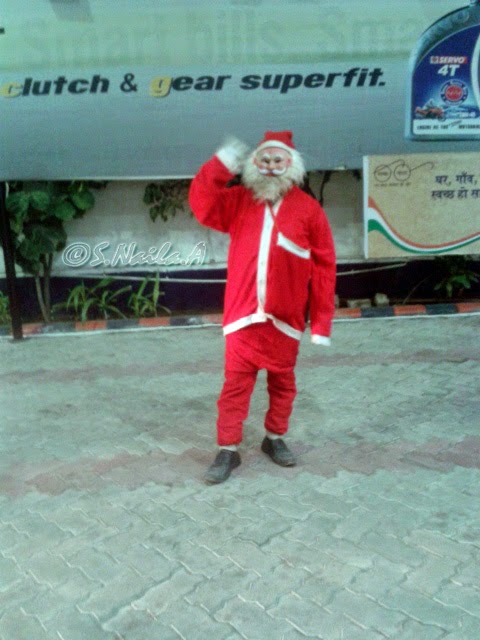 Overall it was a great day for all of us
and first time Seeing how people celebrate Christmas In Aligarh City :)

Those of You who might be interested in Some awesome Christmas Items and ways to make this holiday season even more special should give this blog a try http://ourholidayshopping.blogspot.in/
It has some really Great stuff here

And last but not the least 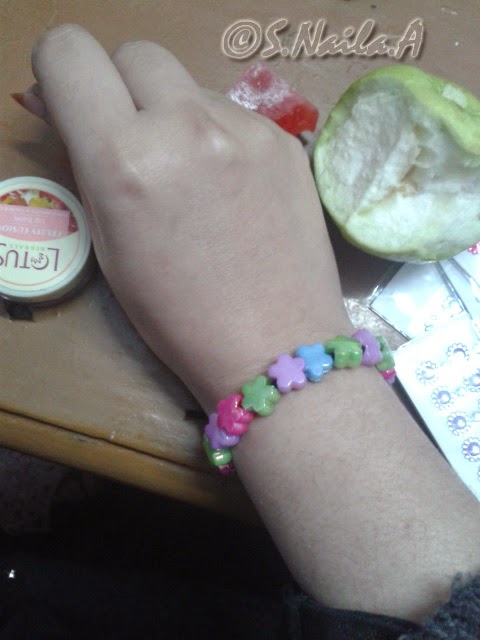 Here's a bracelet i made on my own for the first time
I know this is totally unrelated to Christmas post but too lazy to make a separate post for xD
and with all the colourful Christmas Decorations, this matches well with it xD
Posted by S Naila Ahsan at 16:47 No comments:

Dont Say you Love me 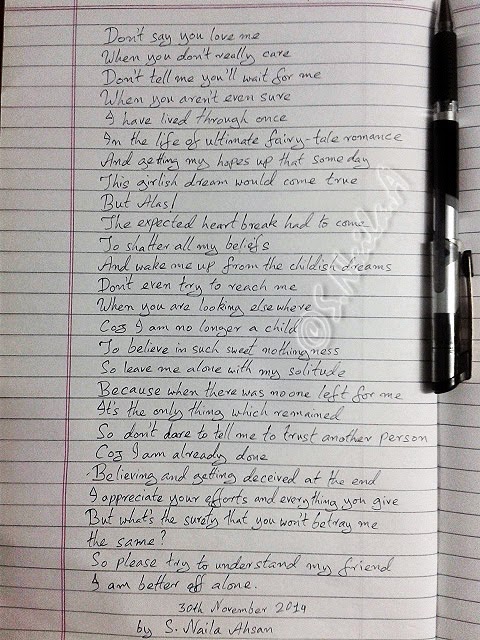 i think its more than a year since i have written something
so this is what i ended up with
i know its so not perfect but what can u expect for after more than a year later writing? =P
anyway
for those who cant read my hand writing xD
Here goes:


And getting my hopes up that someday


This girlish dream would come true
But alas!
The expected heartbreak had to come
To shatter all my beliefs
And wake me up from the childish dreams
Don’t even try to reach me
When you are looking elsewhere
Coz i am no longer a child
To believe in such sweet nothingness
So leave me alone with my solitude
Because when there was no one left for me
It’s the only thing which remained
So don’t dare to tell me to trust another person
Coz i am already done
Believing and getting deceived at the end,
I appreciate your efforts and everything you give
But what’s the surety that you won’t betray me the same?
So please try to understand my friend
I am better off alone

Sooo
i was cleaning the mess around my room and with with clothes, colours and everything scattered around and before i know it, i ended up making this on my hand instead of cleaning >.<
So much for getting bored n distracted xD 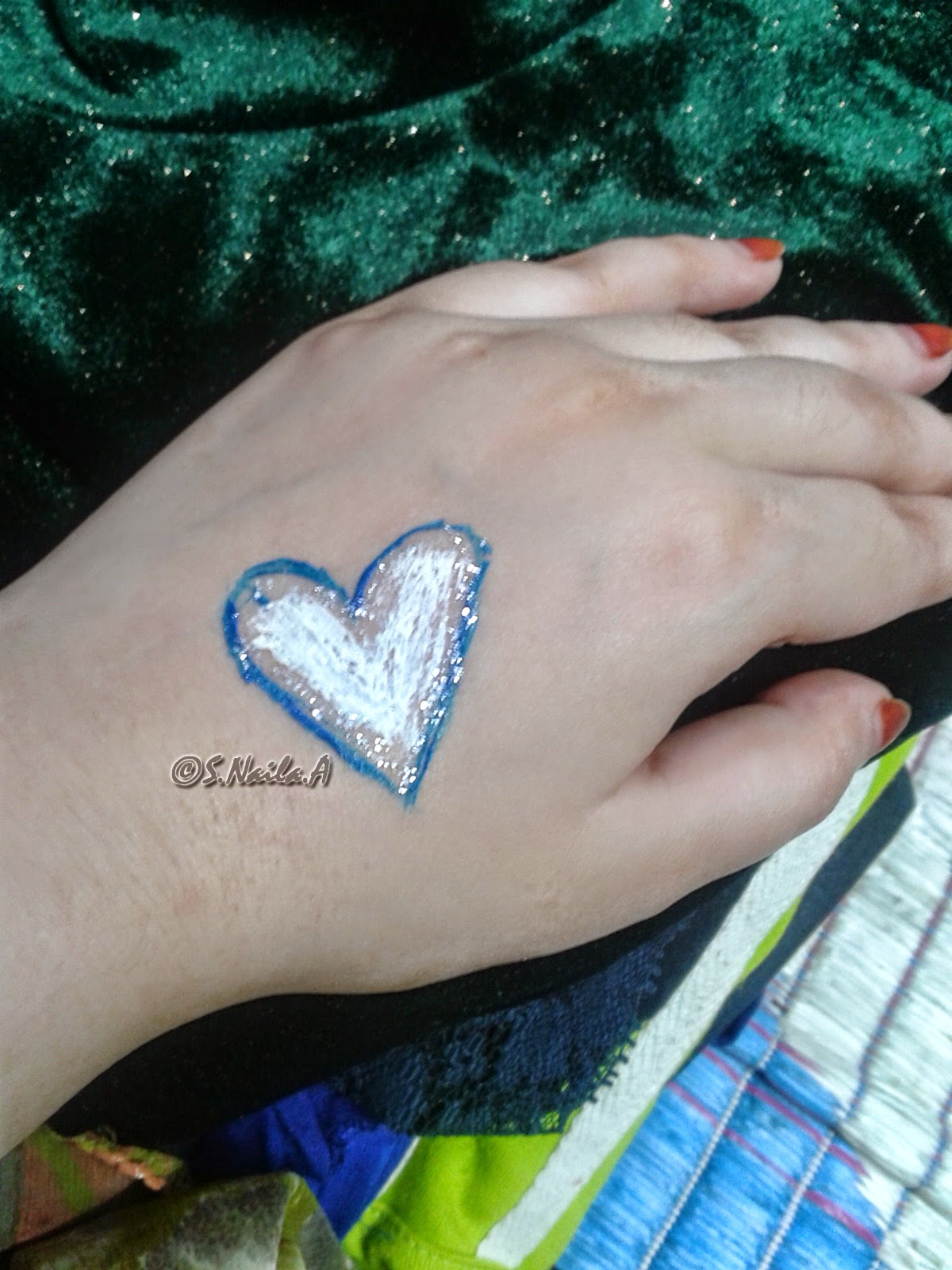 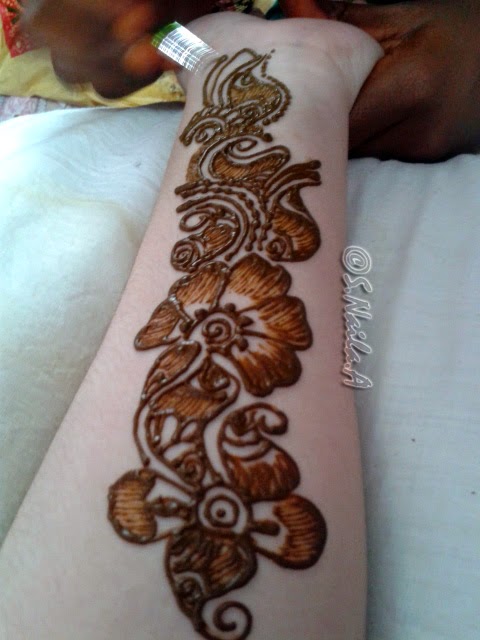 Eid Mubarak and Happy Deewali
Everyone ^-^
These two festival are like one of the most favourite ones of mine.
We get all sorta yummy food during this season.
The whole city is so beautifully decorated, it looks as good as Christmas in India. 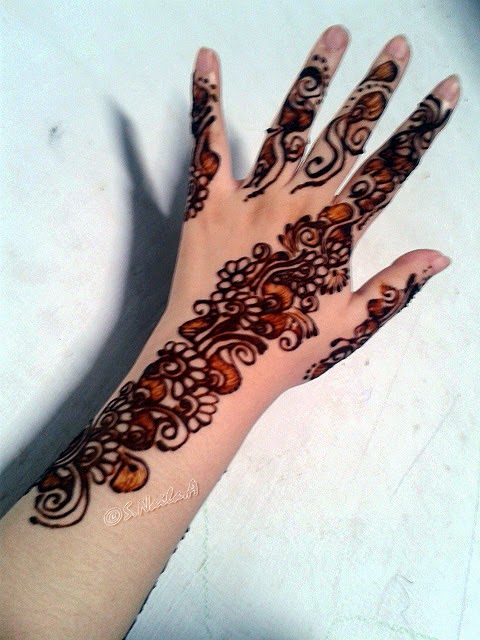 And During Deewali night its like the Japanese Summer festival, Only difference is that in Japan there is a set location for fireworks and here in India you will see your whole city lightening with fireworks wherever you go.
And Obviously getting dressed is mandatory which every girl loves =P
and Getting Mehdi/Henna on our hands during these times is like a 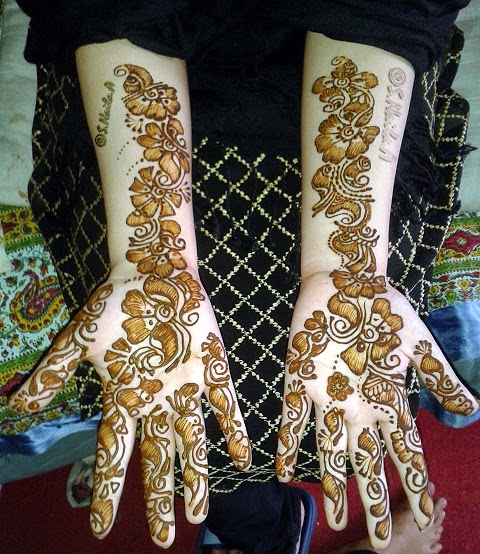 tradition in India which beautifies everything even more.
And for me, I got this on my hands after i dont know how many years =D
I usually get so busy during the festival time with all work and preparation that i dont get time to leave my hands useless like this =P but, after seeing every women in my house getting 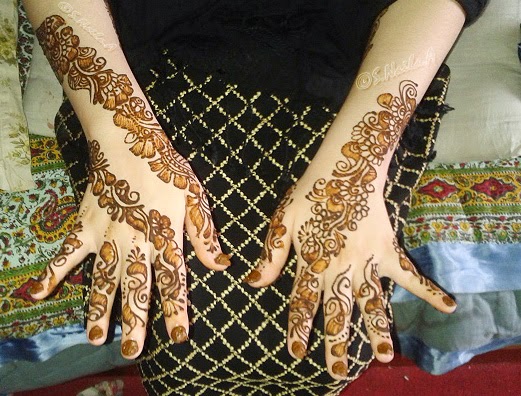 all ready and festive for the  season i just couldn't help it either.
I hope Everyone else is also Enjoying this festive season to the fullest ^-^
Posted by S Naila Ahsan at 20:38 No comments:

Too much gaming is bad for health but we cant help it since we are the gamers xD
A friend of mine forced me to play this game and man.. i cant seem to put it down anymore (>д<')
Been playing for almost a month and I am like even more addicted than him by this point ;D 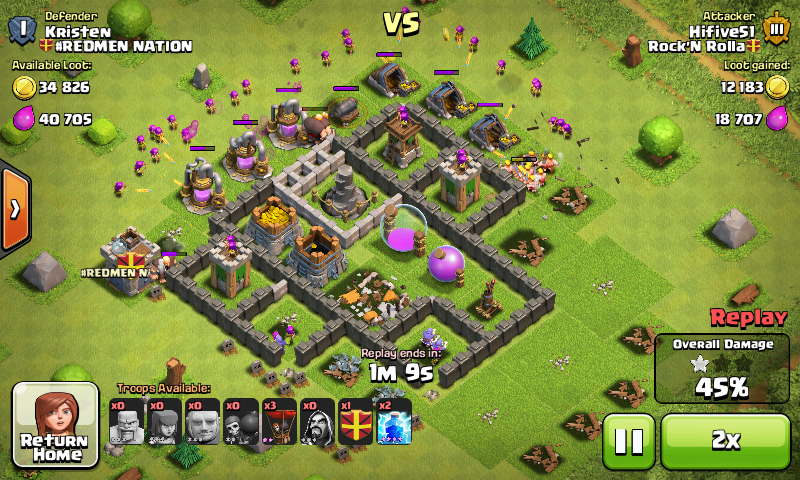 If you are looking for a high quality gaming like those in PC and consoles then you will be disappointed but for a gamer like me who cant live without gaming even with busy schedule this a rather decent game  (///▽///)
it requires a lot of strategy for a good game play
overall its very much fun if you have friends to play with specially
as for me, i even created a clan of my own with my friend and now we are owning in wars Rock'N Rolla !! xD
Posted by S Naila Ahsan at 23:26 No comments:

So this is like my first blog
been wanting to start one since years but never got the courage to do so >.<
but i guess as people say 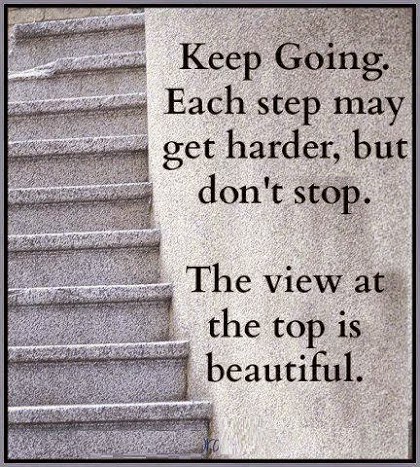 S Naila Ahsan
Hello I am S Naila Ahsan From India I am currently a Student and love blogging to share out my experiences and feelings about everything :)